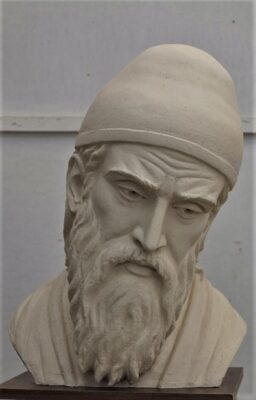 When Ptolemy once asked Euclid if geometry could not be mastered by an easier process than by studying  the “Elements”, Euclid returned the answer: “There is no royal road to geometry.”

Euclid was a follower of Platon. At the invitation of King Ptolemy he came to Alexandria, where the famous scientific center with the Library of Alexandria was located. He taught geometry, arithmetic and astronomy at Museyon.

By III century BC Greece has accumulated rich experience of geometric material that needed a strict logical system. Euclid has done that titanic work. He has written 13 books “Elements” of geometry. Euclid not only systematized the geometrical material that was known before him, but also supplemented it with his own research. Euclid’s works “Elements” take place of the whole epoch in synthetic geometry.

Subsequently, geometry science has developed and non-Euclidean geometry has appeared. Geometry has become       an experimental science in physics. Nowdays school textbooks in all the languages of the world literally copy the “Elements” of Euclid.