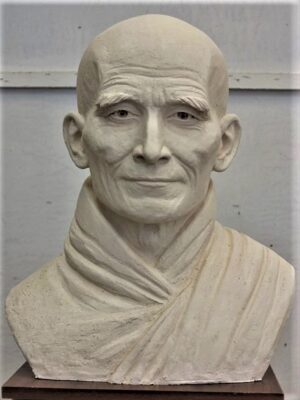 “Although the Buddha preached the mechanism of the Doctrine, consistent Learning, the food of the Dharma is only in your hands. If your heart refuses to feel, can there be a big loss for anyone other than you?”

Buddhist monk of Theravada of Myanmar, famous for his outstanding memory and active educational position in the Sixth Buddhist Council.

Since he was young, Maung Khin (name at birth) studied Buddhist canonical texts. The boy demonstrated outstanding abilities of memory. In his 19 years, he became a monk and in the following years he successfully passed various tests and examinations.

In 1953, he brilliantly withstood the test of knowledge for the title of Tipitakadhara, which means “Tripitaka keeper”. In 1955, the Venerable Mingun Sayadaw began writing a treatise on the history of the life of the Buddha, which he finished in 1960. Mingun Sayadaw always supported materially and spiritually the members of the Sangha in their study of Buddhist canonical texts.

In 1985, the name of Mingun Sayado was listed in the Guinness Book of Records as a record holder in the nomination “Human Memory.” He recited 16,000 pages of Buddhist canonical text in Yangon (Myanmar) in May 1954.