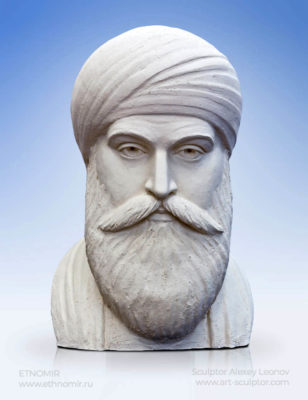 “Be pure and the Truth will be revealed to you. Above all, have the love of God in your heart And do not harm the feelings of His creatures”.

GURU NANAK – founder of the Sikh religion that originated in the Indian Punjab at the end of the 15th century. Years of life 1469-1539.

The essence of the Guru Nanak message is love for God and for man. Guru Nanak bases his teaching on the unity of God as the one source of religion. There are no differences between people of different faiths. In attaining salvation, Sikhism rejects all fasts, worship of statues, rituals and customs. He rejects self-torture, retreat, and renunciation. The goal of the life of an individual is to unite and merge with the Supreme Soul. The main obstacles on the spiritual path are five vices: lust, anger, greed, affection and selfishness.

The teaching of Guru Nanak is not an exclusive domain of the Sikhs or India, it belongs to all humanity. Guru Nanak witnessed the glory of God, the unity of the people, the unity of the law, fellowship and the love of the people. He reconciled all religions and all faiths. Guru Nanak came to show that in all the temples, altars and sacraments of man one flame of love shines. Sikhism is characterized by unprecedented tolerance and accepts all the religions of the world, stating that all spiritual teachings speak of the same thing.